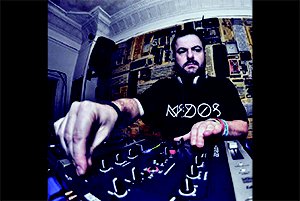 MSDOS hailing from a small island in the Greek Isles, his approach to music seems to be suspended in time. With his tunes containing the sunshine of life on a small island in Greece, the general vibe that can be heard in his productions is that of the golden years of Good Looking Records. Noted by LTJ Bukem as one of the purest sounds to date MSDOS continues to confront the mainstream facade with soul. A professional DJ for well over a decade his passion for Drum & Bass and fast soul music remains ever present. With releases on Good Looking Records, Liquid V, Fokuz Recordings, Soul Deep Recordings to name a few, he has been earning bookings across Europe for some years. With his first states side tour in 2016 his long awaited return was met with tremendous response. With Support from LTJ Bukem, Fabio, Ez Rollers, Bryan Gee, Komatic, A-Sides, Nookie, Jumping Jack Frost, Atlantic Connection, Random Movement, JayRome, Bachelors of Science, AshAtak, Command Strange, Lm1, Greg Packer, and Stunna his next North American tour is sure to be sought after by everyone in the Drum & Bass industry.